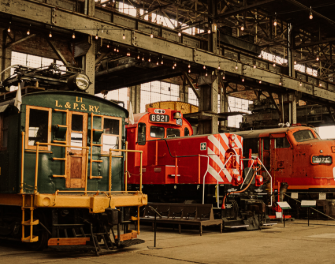 In the shops of the Elgin County Railway Museum building our collection of rolling stock including steam, diesel, and electric engines, cabooses, baggage cars, passenger cars, motor and hand cars, velocipedes and more is on display!

We currently have 3 rolling stock available for visitors to come inside. The cab of the 5700 Royal Hudson steam engine, where visitors can see where the engine would have been operated. The Grand Trunk Western caboose: which would have provided a living space for crew members and being their work space to inspect the cars and keep an eye on the train cars during travel. Lastly the Canadian National baggage car is the only car visitors are able to enter that is not restored to how it would have been used when it was in service. The baggage car was once a mobile Museum and would travel between cities bringing the displays of railway ephemera inside to new visitors, the baggage car now has a more permanent space with us but still has the touring displays on show!

The shops also holds our Agents Office diorama, the building’s original Supervisors Office, and many other interesting architectural features from its stepped roof construction to the two crane hooks used to lift locomotives during maintenance. Visit for yourself to see all of the wonders!